Review of The Zeta Cartel by AJ Adams 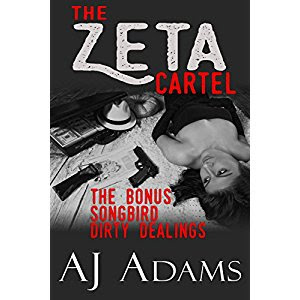 The Bonus is the story of drug mule Chloe, cast dramatically into the midst of the cartel after a deal goes badly wrong. After some brutal treatment, she is given to the mob boss’s right hand man and brother, Kyle, as a bonus for a job well done. It is then Kyle’s job to keep Chloe in line, or she is likely to meet a very messy end.

Songbird is the mob boss, Arturo’s, story, together with the woman he liberates from a rival gang. Solitaire is feisty but their mutual hatred soon turns to something more passionate. As Arturo rules his cartel with an iron fist, he finds his only weakness is the woman he has claimed as his own.

In Dirty Dealings, it is cartel thug Quique’s turn to tell his story, as he sent to London to dominate the South London gang scene and keep the local thugs in line. He meets Natalia, a young matriarch who has her own problems keeping her unruly family in line, as well as making a success of the family pub. Other family members are involved in some very dirty dealings, and when the Mexican contingent move in, things become very bloody.

Inside the Zeta Cartel, no-one apologises for who they are. Punishment is brutal and bloody, and passions run high. There is an emphasis on honour and loyalty, and the men are macho because God forbid they show any signs of weakness. That would weaken the cartel and bring the whole thing crashing down. With high-rolling business deals at stake, their influence is felt around the globe in all kinds of ventures.

Adams has created a totally convincing and evocative world, one that is compelling to watch as each story unfolds. The main characters in each case are strong women who know how to survive, and will do almost anything to do it. They are no victims of the men as much as participants, first unwilling, then as they are drawn deeper into the cartel’s web, pragmatic enough to know how to thrive within it. There is bloody violence, as traitors are made an example of, and grisly deaths. There is rape (this is not for the faint of heart) and women being treated badly. And also, there is lots of panty-wetting sex with the muscular, ruthless male lead characters. I can’t say heroes, because these are all villains of the first order, albeit honourable ones.

This is unashamed fantasy, but so well-written it almost seduces you into thinking that the life of a cartel woman might be quite fun. And the business deals, the way the cartel is run day to day, the descriptions of Mexico and South London are spot-on. The prose is littered with endearing British-isms (the heroines are from the UK in each case). Words like “bonking,” “bum,” and using “love” as an endearment are littered throughout, yet the cartel characters have their own distinct voices, without the need for colloquialism. I heard their voices in my head as they had been drawn so well.

The editing could have been crisper in places, especially in Songbird, where the writing (good as it was) somewhat outweighed the plot. (I found myself skimming in a couple of places, but then rereading, which I hate doing.) But in Dirty Dealings, where there was more plot and less sex, there wasn’t a wasted word. In The Bonus, the sex was smokin.’ And I loved the potboiler bit….