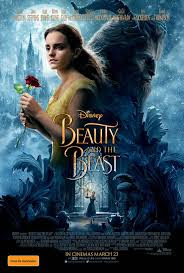 
I've just been to watch Beauty And The Beast, something I was looking forward to as I loved the original, and there is nothing like knowing the story so you can settle down and just enjoy the movie, rather than be awed, terrified, disturbed, etc., etc. Sometimes, just watching and enjoying is enough.

And it didn't disappoint, staying very close to the original and throwing in some in-jokes that will go way over the kids' heads. The sets are lavish, and the musical numbers as accomplished as you would want them to be. Emma Watson is not a natural singer but she has good back up with an impressive cast of tuneful villagers, and she does well, with a light, clear voice that suits her role. One quibble would be that she isn't very animated, especially during the Be My Guest number, when you would expect her to show delight, maybe bounce in her seat a little. Instead, she was curiously passive, with her usual calm smile. I couldn't help thinking I was watching Hermione Granger, albeit with a better wardrobe. Talented as she is, she seems to be the same in every movie she stars in, even down to her hairstyle.

The film is long, over 2 hours, and bearing in mind the target audience, it could have been shaved by about 1/2 hour. There were a couple of extra songs, and an odd sequence involving a trip to Paris that could have been dispensed with, neatening the whole thing. I could see why they did it, to develop the relationship between the two main characters so they weren't just falling in love over a snowball fight, and to help Beauty understand what had happened to her mother, but it felt out of place and was ultimately unnecessary. The new songs were good, but ultimately forgettable and I'm sure smaller viewers would be wriggling at this point, wanting to get on with the story. This is a tale that doesn't need to be messed with too much, and it was the finer details that were far more fun; Le Fou's camp sidekick, the three tough guys turned into queens, Gaston's utter odiousness, the tender relationship between Lumiere and his feather duster lover, and the frankly eye-popping special affects that ran through the whole film. It was a gorgeous, colourul Regency extravaganza, so rich in detail, ones' eyes were in danger of suffering from indigestion. Those prone to migraines or with an aversion to sweet things take note. Toothache and gripes might ensue in natural-borne cynics, but I loved it. If I watch it again at home, though, I'll probably make a cup of tea during the prolonged pub scene. There is only so much Gaston self-love I can take.