An Asian Minor: The True Story of Ganymede (Audiobook) by Felice Picano 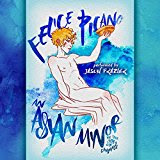 This book was originally written in 1981 by Felice Picano, and details the early life and career of Ganymede, as told by the alluring boy in his own words. It is extremely well-written, a colourful, ribald account of his escapades as he fights off the attentions of men of all rank and age. His beauty also captures the attention of various Immortals, who will go to great lengths to seduce him. It probably should be noted to those unfamiliar with Ancient history that Ganymede is 12 at the beginning of the book, so 21st century sensibilities do not apply.

The book hasn’t been in print for a long while, but now it has been republished as an audiobook, narrated in a salacious drawl by Jason Frazier. This is the first audiobook I have listened to all the way through. The delivery is everything, especially with a book that could be dismissed as being either too highbrow by some or too lightweight by others. This would be a shame. In fact, it is a witty, sexy, sometimes humorous account of Ganymede’s life. The reader gets a peephole view into the lusty world of Troy and its inhabitants, where beauty is highly prized and judged at every turn. Ganymede is the most beautiful of all boys, gaining sexual experience with a variety of Immortal lovers, before being disgraced and shunned for rejecting the top man, Zeus; probably not his greatest career move.

Jason Frazier’s voice should have an R rating. He could read a telephone directory and make it ooze with sexual promise. The book itself is not explicit, but the theme of lust runs through it in a pulsing thread. Ganymede learns humility, but still retains an arrogance that only truly beautiful people can get away with. He isn’t particularly likeable, but that doesn’t matter. His story is told in such rich and gorgeous detail, one cannot help but be captivated. This is a book to be savoured at home, rather than driving, or in a public place, as it would be a crime to miss a single word.