I identify as someone who listens, and takes heed when necessary 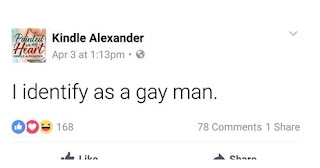 The original title of this post was "The Only Time In History When 'A Woman Should Know Her Place" really does apply." A couple of people have informed me that they found this title degrading, so I've changed it, and apologise for the offence caused.

Just putting this here to save me the effort of explaining yet again. These six ill-advised words will haunt Kindle Alexander’s writing career for a good long while after the recent debacle, and plenty more words have been said about the whole thing, which was presumably said in a flippant manner without any idea of the disapprobation about to rain down on her cisgender, female author head. I don't suppose we will ever know why she said it, because she hasn't thought to quantify her statement, only saying that she's an Ally (capital letter A) and that the haters should stop hating. There has since been an apology but I'm not going to go there with this post. It's just .... no.

But isn't this interesting? Suddenly, as a result of Ms. Alexander's monumental FUBAR post, the whole MM Romance genre has a rather tainted, smells-like-rancid-cod air about it, with several high profile authors questioning whether they actually belong in the genre at all. A community that is used to being marginalised has been shoved out yet again, by women readers who don't want to know the nasty bits about being gay. The problem is, there is a LOT of them, outnumbering the people they are actually reading about.

Come on, sisters, we should know better than this! We know what it is like not to have the vote, to be denied proper education, to be forced into marriage, to be overlooked for the top job, to be objectified and blamed for mens' weaknesses. We've fought tooth and nail and made huge sacrifices to claw back some equality to men, so why are we doing this to the gay community? I don't understand it. Those people saying, it's just a bit of fun, just don't get the bigger picture. It might be fun to be fabulous, but not if you can't walk safely home afterwards. We KNOW this, so what is the problem with acknowledging it in our fiction?


Unfortunately, I think with all these posts, there is an element of preaching to the choir, but you know, posting does help to sort your thoughts out into some kind or order, so maybe next time someone says something really dumb on the net, you might be able to save them from themselves.

Now an observation. A lot of male gay authors have written their own, eloquent and rightly infuriated, posts, but as yet, when I’ve looked for posts from cisgender female authors on the same subject, I hear nothing but crickets. This seems strange, as the MM Romance genre is bulging with female romance writers publishing MM fiction, so where are their voices? No-one seems to be saying a goddamned thing. If I’m subsequently proven wrong, then I will gladly withdraw this statement but nothing has come up on my newsfeed so far, which I think is odd.

The next thing, the the main reason for the post, is that we can all learn something from this. When I first saw KA's post, I thought immediately, “maybe she’s trans, and she’s just come out, so good for her!” But something felt a bit …. off, especially when I saw the comments, with lots of LOL’s and “me too!” and hearts, etc. It just didn’t feel… right. But I didn’t say anything, mainly because I couldn't quantify WHY it didn't feel right.

But the more I thought about it, the more stupid that post sounded. And THAT was the moment when I should have messaged her and said ‘y’know, that post may well piss a few people off (understatement) so if I were you, I’d reconsider it.” But I didn’t, because by then, someone else had noticed and said, “wait…. WHAT?” I do wish I had tried to say something to her. I'm not sure it would have made any difference, but I should have tried, as a fellow cisgender female author, because a lot of people DID feel hurt by this, and some trans people feel invalidated because a flippant comment makes light of their very real struggle.

So this comes to M/M Romance, the tarnished genre which has actually brought about an honest discussion about what being part of it actually means. First off, TALENT IS NOT GOVERNED BY GENDER. This is not a poke at all women writers, but if MM Romance means the stereotypical, pornographic books with cardboard cutout MM protagonists, written for a female audience, then I’m not interested, thanks very much. For a while, I’ve felt uncomfortable with the whole, slightly giddy, MM Romance thing, the objectification of men, and the blinkered readers who resent it when gay men point out that they’ve been marginalised by their own genre. I’d really like my books to be read by the audience I intended them for; LGBTQIA, etc.THEY ARE NOT EXCLUSIVELY FOR WOMEN. I was very fortunate to “meet” an author who is very special to me. SA Collins, please step forward.) He said that the main thing I must remember was to respect the people I was writing about. So I do. Well …. I treat them with the same healthy disrespect that I treat all my characters with, regardless of gender, race, class, etc., but I got what he meant. I will never know what it is like to walk in the shoes of a gay person, to keep watching over my shoulder, to be called ‘faggot.' There ARE certain similarities with women’s rights and struggles, but they are not the same and never will be. They are equally as valid, but equally as different.

I for one try to remember my place. As a woman I still have more rights than many gay people. It would be wise for us never to forget that, and to be an ally (no capital letter necessary.)