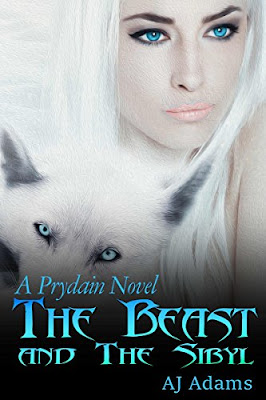 Before I read A J Adams' latest foray into fantasy romance, I had not known what a Sibyl was. Another name for witch, apparently, or at least, a woman with enhanced powers such as visions and an affinity with animals and nature.

The Beast & The Sibyl is the second book in the Prydain series, but it must be stressed, can be read as a standalone novel. I had no problem in getting into the world that the author had created, of two rival communities in a fantasy land that seems both far away and very familiar. There are autocratic leaders, greedy politicians, people who are happy to believe one thing and are afraid of change; a superstitious people, who at once revere and fear those with powers they cannot understand.

The sibyl, Bliss, lives in comfort but also in fear, as she doesn't want to be used by the powers running the land she lives in and loves. But her visions have led her to rescue and care for a man she calls Beast, who has strayed into enemy territory. But the time she has tended his wounds and helped him escape, she is in mortal danger, as well as in love.

I am familiar with A J Adam's work, most recently, The Zeta Cartel, and this follows a similar pattern. The stories are told from two points of view; Bliss and the Beast's, first giving her opinion of what is happening, then his. The result is that you get to know the characters really well, and have a bird's eye view of their reactions during the development of their volatile relationship. They have been brought up to be enemies, but are gradually becoming friends, allies and lovers. So readers in love with A J Adam's style have nothing to fear. They will get what they love.

But as well as that, the language is fruity, there is humour, and the voices are authentic, giving a genuine fantasy romance feel. This isn't just The Zeta Cartel with wolves and spears, but a fully-realised, carefully thought out world, backed by intensive research to make it real. The formula is familiar, but told in a very engaging and entertaining way.

It is a long book as well. You always get good value with A J Adams. There are plenty of characters, but not too many, some great boo-hiss villains, some awesome fight scenes and pert exchanges between the two leads, as well as panty-wetting sex, although they don't really get it on until much later in the book. This is as much about the story as it is about the bonking, and a very entertaining story it is too, especially with the addition of Bliss's sidekicks, a wolf and two gorgeous kitty cats. This author knows what her audience likes, and doesn't disappoint. 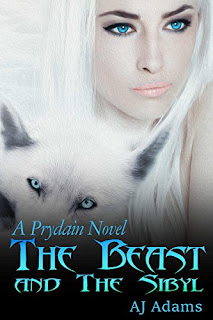 “We caught a Beast! A real live poxy Beast!”

Bastards. Calling us beasts while they cheat, steal, and lie. I got kicked in the ribs, a whip laid about my shoulders, and all the time they were screaming.

Then I saw her. She was standing there, staring right into my eyes. For a moment, I thought I was looking at a Valkyrie, one of Valhalla’s shield maidens. She had hair the colour of ice, and eyes as blue as the sky. Tall, willowy, and silent, she looked unworldly. There was a wolf at her side, too.

I blinked, expecting her to vanish, but it wasn’t a vision. She was real. The knowledge hit me with a punch that sucked the breath out of me. She was one of us, a Skraeling of Thule.

She leaned on the wolf, controlling it with a touch of her hand. “Lady Freyja always advises counsel before action.”

A Skraeling woman who invoked our goddess yet who was a traitor. I was filled with sudden hate, poisoned by the thought of one of our own people contaminated by foul betrayal.

If the will were a weapon, she would have fallen on the spot. Instead, the world blurred again. I think

I passed out for a few moments because when I opened my eyes, he was there. The Patriarch. A cheat, a liar and all-round scum bucket.

He certainly hates us Skraeling. “Glorious Ullr will bring us wise counsel. And tomorrow we will flog the Beast to cleanse him of his sins, and then we will burn him alive!”

He’s a vicious Beast, violent and dangerous. Bliss knows she ought to walk away. After all, she has a dark and dangerous secret to preserve. When she can’t leave him to burn, her rescue tumbles them both into danger, adventure and romance.