Book Review: Pregnant For The Alpha by Judith Shale 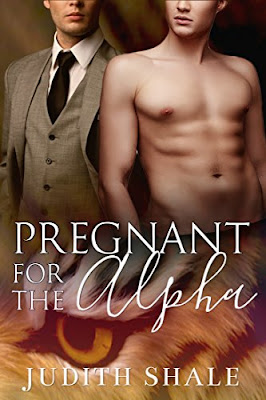 It is fair to say I had fairly low expectations, given my previous experiences with MPREG books. (One didn't actually have any MPREG in it. The alpha gets the Omega up the duff off-screen and then voila! The kid is in kindergarten...)

This, however, is much better, a neat, standalone story which packs a lot in its 150 or so pages, from Omega Mikey realising he is "on heat" to finding his forever mate and settling down with him. It happens quickly in the shifter world. No disastrous first dates and all that nonsense. One sniff and yep, he's the one! It probably goes without saying that realism goes sailing out the door when picking up a book called Pregnant For The Alpha. After all, we are dealing with MPEG, shifters, plus interspecies mingling that wouldn't exist in real life. It made no sense so you either roll with it and just go with the flow, or give up in the first few pages because it defies the laws of human logic. The clue is actually in the title of the book at the front cover, so really, there's no excuse for that.

I decided to roll with it. Any book that just bats tropes around like a cat with a mouse and then stomps all over them is gold in my book. The story was well-balanced, with cute, likeable characters. There is also a solid subplot involving Mikey's wish to get his screenplay accepted by a major motion picture company without compromising his artistic vision, and the Alpha fighting off a challenge to his authority. Yes, there were predictable romance markers, the fabulously rich Alpha, the boo-hiss villain, but kudos for not shoehorning in a "boy meets boy, boy loves boy, boy loses boy, boy gets boy back," scenario, AND for tackling the whole MPREG thing head on. Yes, I wanted to know how Mikey was going to give birth, how they were going to feed the baby. I needed this information, and I wasn't disappointed. So often it is glossed over, but that ain't good enough. If it's MPREG, those issues HAVE to be tackled and worked into the story without any cracks showing.

I would have liked to see more of the animal side of the shifters, and more feline traits in the humans, but I find this is lacking in most shifter books I've read so far, to be honest. It's as if the human/shifter sides are mutually exclusive, which I find odd. Still, it didn't spoil the story. It just would have enriched it further.

So a quick, fun read, sticky, scorching sex and a satisfying ending. All in all, a great job, despite the fact I was mildly disappointed that the Omega didn't give birth to cute, fluffy Jager (jaguar/tiger) kittens. Now THAT would have been fun.

Someday Mikey will find his alpha. The independent young jaguar shifter hopes that day is far in the future... even if his need for a mate becomes unbearable every time he goes into heat.


When Mikey returns to his hometown, the last thing he expects is to find that fated connection. Especially with the pride alpha, the devastatingly handsome Lukas Waverly.

While Mikey would prefer to take things slow, Lukas has powerful reasons to put a baby in him as soon as possible.

Is Mikey ready to get pregnant for the tiger alpha?