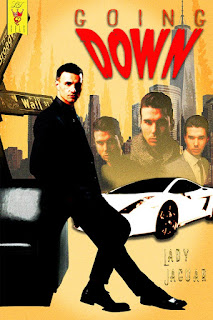 Going Down is out on Amazon, and I'm working on the paperback version as we speak. Look out for the next post which give details of a special Valentine's Promotion, where you can pick up Going Down for $0.99 for the next five days! (PS: It IS for over 18's...)

Full of filth and high-octane frolics, Going Down is a work of pulp fiction, the first in Lady Jaguar's Pulp Reads series.
Tino Santini is offered the role of Personal Assistant to his wealthy CEO, after being trapped with him in an elevator just before Thanksgiving. It seems a night of scorching sex can do wonders for a flagging career.

Now his new boss wants more of Tino's talented mouth as well as his organisational skills. Neither of them expect their professional relationship and private arrangement to be anything other than business, until a personal tragedy means that Richard needs Tino more than ever.

Wealthy pansexual businessman, Richard Mason, seems to have it all, but a former female lover, a New York gangster and a murky past all threaten to destroy his chance of happiness.

Tino is the sensible employee who gets stuck with Richard in the elevator, but a bottle of cognac, some donuts and an indecent proposal send him on a hedonistic journey of sex, murder and possibly love.

Author's Note: Richard Mason first appeared in Jayne Lockwood's novel, Closer Than Blood. Whilst some elements of that story are mentioned in this book, this is not a sequel.