Book Review - Love On The Hudson by K D Fisher 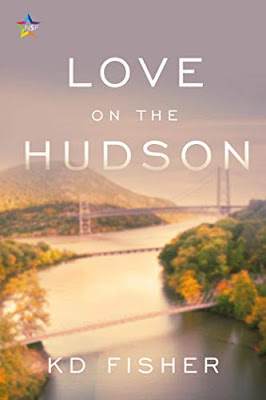 This is a prime example of a book I bought purely on the strength of the cover. I saw the author on IG, loved the cover and promptly bought the book about a year ago. I don't think I even knew what genre it was at the time. It's an example of how a cover can work, if one thinks outside the box. The story could easily fit the "two hot guys against a background of sunny poppy fields" scenario, but they didn't do it. Massive respect to them for not going down a well-trodden path.

It's a pure coincidence that I've read two books with Greek protagonists in the last three weeks, but the style and done of each one is very different. This book as a more serious tone than the other one, although they both deal with bigotry and the lack of acceptance, complicated family dynamics and hard choices.

But 'serious' in no way means dry. The author has a deft touch when dealing with each character's struggles, and has surrounded the protagonists with a lovely array of side characters, each with their own fully-realised stories.

The book loosely follows the normal romance trope. Boy met boy in the past. Can't forget him. Circumstances mean they meet again. Fall in love again, then hit obstacles, etc., but I for one LOVE this pattern, and this book didn't disappoint in any form. It was in turn romantic, heartbreaking, tense, ringing a whole gamut of emotions out of the reader.

The characters of David and Nick are wonderful; so endearing yet flawed as well. I was afraid this was going to go down the "gay and hating himself" route for Nick, but of the two, he was the more lovable, if I'm honest. Although that doesn't take away from David, ambitious, lonely, hard-edged because he has needed to be. It's a case of opposites attracting yet working with each other's differences, and it was beautifully done.

This was a book I took a gamble on, and I'm so glad I did. I'm sure I'll re-read it again in the future.

Art historian David Webster left his childhood home of Saugerties, New York ten years ago and hasn’t looked back. Intelligent, successful, and proud of his sexuality, David has built a comfortable, if lonely, life in Chicago. But when he learns his father has suffered a debilitating stroke, he decides to leave his prestigious museum job and move home to care for his dad. Until now David has never questioned his devotion to academic and professional success. Suddenly he’s forced to confront and reevaluate his desires, chief among them, his former best friend Nick.

Nick Patras has spent his entire life trying to be the perfect Greek son. From devoting himself to football, to forgoing an athletic scholarship to work at his family’s diner, to denying his sexuality and getting married to his high school sweetheart, Nick got used to putting his family’s dreams ahead of his own. The facade shattered, however, when Nick divorced his wife and left the family business to follow his dream of starting an organic farm. Finally content with the life he’s built for himself, Nick is still haunted by the mistake that ended his friendship with David a decade earlier.

When David and Nick reunite their old feelings are undeniable, but can David trust Nick with his heart a second time around? As David embarks on a new career as an artist, he must decide whether or not Nick fits into this composition.