I seem to be OD'ing on romance novels over the past few weeks, and it was a pleasure to join in with A D Ellis's blog tour and have the chance to read her new novel, Hearts Ablaze, the first book of the Forged In the City series. 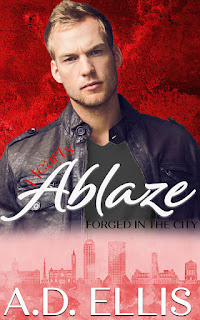 The book was an easy read, with engaging characters and a standard romance plot. Chase and Xander are carved straight out of a Hallmark movie (if Hallmark did bisexual/MM romances) and are sweet and endearing. There is a lovely secondary character called Ginny, who has terminal cancer, and a rough diamond biker/mechanic who gives Xan a lucky break.

The action centres around The Salty Lizard, where Chase has also given a lucky break because he is the brother of the little girl the gay owners have adopted, and a motorbike repair shop, Whitfields. Honestly, I'm sure I've watched American sitcoms just like this in the past. I felt there was more of a small-town vibe, rather than a big city vibe, but it gave the book a more intimate feel, which added to the cosiness of the world the author has built.

There are a lot of lucky breaks in this book, and some dramatic moments which promised conflict or heartrending sadness later on. The problem was, the book never quite delivered on these promises. It was set in a world where nothing bad ever really happened, despite the beloved terminally ill aunt, the evil biker gang from Xan's past, historical abuse and veiled threats to screw up the adoption of Rosie, Chase's little sister. All these were real issues but it seemed with a few conveniently placed characters hoving into view at the last moment, all was well again, leaving me feeling - I don't know - a bit short-changed.


Add in some dialogue that was clunky in places and sex scenes that wouldn't have looked out of place in a hardcore erotica novel, and you have a somewhat uneven story that didn't quite add up for me. It was a shame, because it promised much, but just didn't deliver the power punch it needed. Meanwhile, Chase and San stumble around in their first relationship with another man, having only been with women before, so the porn star talk seemed a little forced. Maybe that was the point. Maybe the author was going for hot, sweet and awkward, but for me, it was just awkward, especially when they then walk into the next scene with the two children in the story, Rosie and Oliver. I KNOW this is personal preference, but hot 'n heavy sex talk and cute kids just don't belong in the same novel.

Kudos to the author for bisexual visibility, and for not falling into the "now we're gay," minefield. Other tropes in full attendance were the "everyone is gay apart from the dotty, supportive female friend," and the token bad guy - who we hardly see anything of - is straight (possibly....) There is also an adorable meet/cute scene which sets the tone for the whole book.

To summarise, the book was perfectly pleasant, with endearing characters. Although I didn't fall head over heels with it, it's hard not to like it. The things I wasn't so keen on, others may love. The author has set up a premise with two great focus points, the repair shop and the diner, and pulled a lot of lovely characters together. There is so much potential here for some of these characters to have their own stories. It would be interesting to read the next book, and discover what happens next.

Warm, escapist fun with a heart of gold. 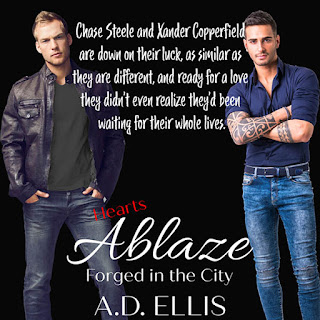 Chase Steele and Xander Copperfield are down on their luck, as similar as they are different, and ready for a love they didn’t even realize they’d been waiting on their whole lives.

*This is the first book in the Forged in the City series.* 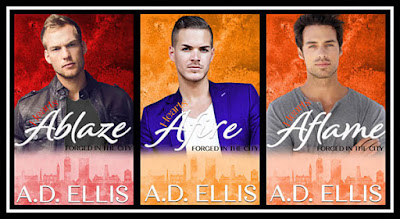