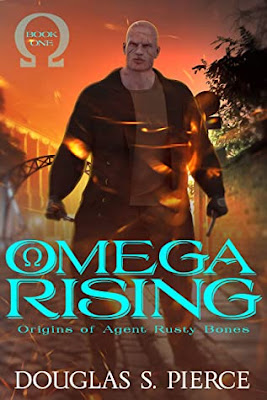 I can't help but like Rusty Bones. He's been dealt a rough deal. A family man who signs a contract, thinking it will give his family a more comfortable lifestyle, gradually finds he is sucked into the sinister Omega Project. As a result, he loses everything, including his soul.

When he wakes up after dying in the line of duty, he has a mystery to solve and a score to settle. To prevent his fate happening to others, he has to turn detective.

What a great premise, mixing zombies with military adventure and pagan and Native American mysticism. Although there were massive chunks of prose in italic, which I always find difficult to read in quantity, this is a hugely enjoyable adventure story, and Rusty is an everyman zombie, robbed of his body but still capable of sentient thought, and an awareness of what he has lost.

This is part living dead, part corporate intrigue, part adventure, with a generous dollop of the mystical as well. Rusty has several scores to settle, including the death of his best friend, and the rescue of the man who helps him find meaning in his new life, John Red Bear.  To do this, he must enlist the help of Ravyn Fyre and other characters which really enrich a story which could be unrelentingly bleak.

Yes, it took me a while to get into the book, and it could probably have done with a nip and tuck here and there to tidy up the storytelling, but this is an inventive premise, one as much about friendship as about an evil corporation using the corpses of dead police officers to create a force of "super-soldiers." Rusty is a zombie with a difference, a monster with a heart, whose appearance belies an honourable mind.

This book takes the traditional zombie genre and shoves a grenade up its ass, and for that alone, I'd love it, but it happens to be a damned good tale too, with good military elements and a sense of justice for the down at heel, the used and abused, good versus evil. You name it, it's in there, and although it's chaotic at times, it's a hella lot of fun and Rusty is an anti-hero worth rooting for. He returns in Omega Falling, but this story works as a standalone as well.

"It's going to be a wild one tonight."

I uttered those prophetic words on Halloween. The same night I died in the line of duty.

In life, I didn't believe in magick, monsters, religion, or souls. Funny how waking up dead with my consciousness trapped in an amulet provided such clarity.

My name is Agent Rusty Bones, and this is my account of the rather dubious life-choices that landed me in the clutches of the ultra-secretive Omega Project. To solve my own death, I must now escape those holding my very essence in an iron-clad grip.

But the clock is ticking. Can I bring my killer to justice before anyone else suffers my same fate?