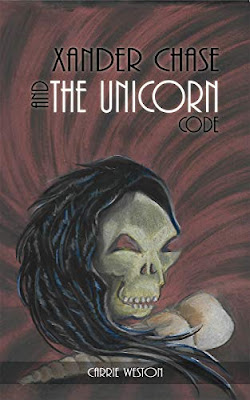 Genre: YA Fantasy, Murder Mystery
I didn't really know what to expect from this. The book starts with a young girl being lured by beautiful music into a forest, where other children are gathering around a mysterious man who leads them to the river. As one by one they disappear beneath the water, Lilly manages to escape, but that's only the start of it.
We next learn there's been a mass murder, and that's where Detective Stacy comes in. I didn't care for her at first, as her attitude, and that of her colleagues, seemed curiously flippant when surrounded by tragedy.
The story twists and turns, and we are next introduced to Xander Chase, an angel of Death, and his brother, Gallilee. Again, Xander didn't seem to have a lot of empathy at first, and I found it difficult to like him for a good proportion of the book.
Also, there is a surprising amount of gore, also unexpected, but for me, that added an intriguing piquancy to the plot, which was bold, with angels, Fae, unicorns and a teenaged girl trying to make sense of a personal tragedy. Anyone thinking unicorns are these gorgeous, sparkly creatures who poop rainbows can forget it. They have evil counterparts, Doublicorns, who are troublesome in the extreme. This was a fantastic, dangerous world weaved from the author's imagination, where all the normal rules are broken. The angels talk like chippy twenty-somethings, the unicorns are murderous - nothing is as it seems.
Lilly, the girl the story centres around, is wonderful. Thank God for a YA book without yet another mouthy teenager. She is vulnerable, sweet yet strong. She was my favourite character by far.
Finally, there were some issues with the formatting, which the author may well have fixed by the time this is published, and there were some overused phrases. "Obisidian wing" jumped out on more than two occasions. Also, some of the characters roared, raged and shouted a few too many times, making them seem a touch histrionic in places.
These issues aside, I enjoyed the story, thought it was fun, and led neatly to the next book. Xander Chase, once he had matured a bit, was a solid main character, and I loved how an Angel of Death was the good guy. His relationship with his brother was touching, and I was intrigued by the hint of romance at the end. All in all, a terrific story.

BLURB
Lilly Honey Star is a 15-year-old like no other; she is the sole survivor of a mass murder and is suspected of being the half-mad murderess.
Detective Stacy has her doubts about Lilly’s guilt, and when a stranger starts asking bizarre questions, she—along with Lilly—is pulled into the core of the case, which is bigger and more dangerous than they could have ever imagined.

Xander Chase, the angel of death and judiciary of spirits, is on the case. Desperate to make his father, Death himself, proud, Xander must unravel the perilous lies and deceit that’s spread through the realms of sinister creatures, before the murderer’s eye turns on him.
at July 31, 2020
Email ThisBlogThis!Share to TwitterShare to FacebookShare to Pinterest
Labels: adventure, book review, Carrie Weston, The Unicorn Code