Lots of goodies in this post! Jules Radcliffe has a new M/M pirate romance out: "Pirate Master." There's a sexy excerpt, my review of the book AND there's a giveaway of a $10 Amazon gift voucher!
About the Series:

The Golden Age of piracy—a time of terror on the high seas, of romance and intrigue, of dastardly deeds.

In Port Royal, a brotherhood arises. A society of gallant buccaneers and rough marauders who owe allegiance to no one but themselves. Fiery men of fierce passions who take what they want and love where they choose.

Set sail for swashbuckling adventure with the Pirates of Port Royal!

Jules is giving away a $10 Amazon gift card with this tour – for a chance to win, enter via Rafflecopter: Not yet time to rise.

He subsided back into his lover’s embrace. Recalling whose arms were wrapped strong around him, whose heart beat slow and steady under his ear, Perry smiled drowsily.

Sometime later, he woke alone, the bed beside him cold. Disappointment gripped him. But when he lifted his head, he saw a pair of boots, the tops sagging to one side, and a shirt and breeches hanging from a hook. Quinn’s clothing from last night. Wherever the master had gone, he could not be far.

Perry stretched out stiff arms and legs, and rubbed his tender arse in idle memory. Thinking of last night brought a grin to his face. He climbed from his bunk and stuck his head through the stern window.

The harbour was smooth and still, and other ships and boats were faint silhouettes in the predawn gloom. With only a handful of men aboard and the watch changeover at least an hour away, he took the chance no one would be wandering about this part of the ship. Naked but for his shirt, he dashed to the wardroom quarter gallery.

He peered into the little mirror nailed to the bulkhead. If he stood in the right spot, he could see his whole face in its burnished surface. He was surprised to see looked much the same. He touched the scar under his eye and traced down to his lips with light fingers. Mayhap the customary tightness in his face was eased.

The crew would tease him mercilessly for last night, but it was a price he was willing to pay. He wanted more of Quinn’s kisses, both the rough and the gentle. Never had he dreamed they would be lovers, not after so many months of crossing swords. It had taken him so long to come to his senses. Too long, he thought wistfully. Because one way or another, his time with the Brethren of the Coast was about to come to an end.

The news flying around the port came to his ears as soon as he set foot on land yesterday. Governor Modyford, newly appointed and on his way from Barbadoes, intended to honour King Charles’ new accord with Madrid. The market was abuzz with speculation. If the governor revoked the marques against the Spanish, would the Brethren ships change allegiance? Would they go to the French colonies of Saint-Domingue and Tortuga, or even to the Dutch in Curacao?

The Audacious might not abandon Port Royal, but Perry was still a lieutenant in the navy. He would still have to leave. Making peace with Spain was a clear sign that the English crown had made its decision—war with the Dutch Republic. Sooner or later Perry would be recalled, returned to England to defend home shores. Belike he would be given a command. Not even Commodore Pobjoy’s spite would stop him being promoted in a time of war.

For years, Perry had dreamed of being a captain. For months, he had pined to return home. At last, he was on the verge of having his ambitions granted. He sighed at the irony.

Because last night, Quinn made himself Perry’s master, and everything had changed.

The ambitions he had once aspired to, the blocks on which he had built his lonely existence, the things he had long accepted as his lot in life, all had collapsed like a house upon the sand. Now his greatest wish was to stay in the Caribbean and serve aboard the Audacious. Even if he never rose higher than second mate, he preferred that to being half a world away from Gabriel Quinn.

But his native caution warned him to be wary. Not to put too much stock into Quinn’s sweet words of possession.Their shared passion might be as ephemeral as a candle: burning bright whilst the night lasts, naught but a puddle of cold wax in the light of day.

After all, the sailing master could do better than a charmless nobody. Perry stared at himself in the mirror. Staring back was a man all of drabness: mousy hair, colourless eyes, bland features. And there were deeper things amiss with him, things beyond the power of a mirror to show: tongue-tied in company, lacking any gentlemanly refinement, ignorant and uneducated. What could a man like Quinn see in him?

A complete mess is what he’ll see if I don’t clean up. Perry smoothed down his wayward curls in an attempt to look less freshly fucked. He grimaced, an expression that landed somewhere between smug and rueful. Even if Quinn did not fuck him into disarray again this morning, erelong every pirate in Port Royal would know the sailing master of the Defiant had tamed the uptight Mr Perry-grin.

He filled the basin and stripped, splashing his body and dousing his head. He scrubbed vigorously, feeling an energising tingle all over. Some parts of himself, however, were very tender, and he dabbed the cold water carefully on those raw places.

The door creaked. Snatching up his shirt, he pivoted to put his back to the wall. Quinn stood in the doorway clad only in his drawers, his magnificent chest on display. Perry’s breath caught, and he was tempted to drop to his knees. Instead, he dropped his shirt. Quinn knew his scars; last night he had traced every one with tongue and finger. Perry felt no shame before him.

At this show of trust, he was rewarded with the master’s sensuous smile. He returned the smile shyly and turned back to the basin. He sluiced his torso, washing off the remnants of soap. A new excitement buzzed in his veins when he heard Quinn’s breeches drop to the floor. Arms slid about his waist, and his heartbeat kicked up. A naked chest pressed to his damp back, kisses marked his shoulders. A firm prick prodded his bare buttocks.

“’Tis dangerous for a pretty boy to be wandering naked around a pirate ship,” murmured Quinn into his neck, kissing and nibbling.

Tilting his head, Perry leaned back into the embrace. “Am I in danger, Master Quinn? Surely you’d not take advantage of a defenceless sailor lad.”

Quinn bent him forward. Hands on the bulkhead, he pushed back as a hard length slid between his thighs.

“Only when he’s as saucy a piece as you, Mr Peregrine. I’ll be taking advantage of you at every opportunity.”

I’ve lived, studied, and worked in several countries, but I always return to Australia. My home is near the beach in Queensland, where I live with my unconventional family. But I miss the cold winters and often dream of sitting by a blazing fire on a snowy night. 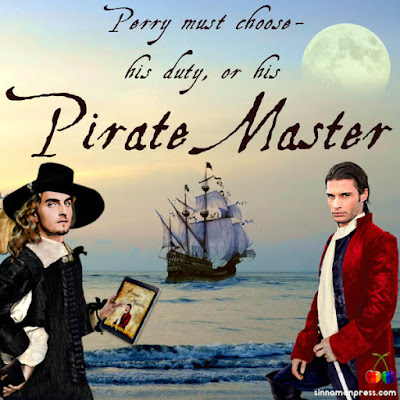 Well, I can honestly say my timbers were well and truly shivered by the end of this raunchy, tender, exciting instalment of the Pirates of Port Royal series.

I had read pirate novels before and to be honest, they were a bit... naff. Lots of "thar he blows" and blokes shouting "aaarrrr." I was bracing myself for the same thing here, but what a pleasant surprise it was to find a well-written historical adventure, balanced with a sweet love story and some deliciously hot sex, all wrapped up in a very well-researched package . The language feels authentic, with enough modern touches to appeal to the 21st century reader, and it in no way distracts from the tale being told.

Quinn and Perry are a compelling couple, complete opposites, the genteel Perry being a tougher character than he first seems. Quinn is the quintessential pirate, albeit he has both legs, both eyes and no parrot. In fact, anyone expecting the usual pirate cliches will be relieved (or disappointed, depending on how you like your seafarers.)

I was relieved. When I was young, I wanted to be a pirate. This book reminded me of that. There was a good amount of swashbuckling, sword play, a rescue from the grottiest prison in the world and a female pirate captain, with bigger balls than some of her male counterparts.

The pedant in me kind of wanted to know how the main characters kept their teeth looking so great, when everyone knows that pirates aren't big on dental hygiene, but that small detail aside, I loved the effort that had been put in to setting great scenes, with incredibly visual detail. I could see the creaking galleons, hear the snap of sails, smell the filth of the prison and feel the sense of desolation when Quinn realises he has been tricked, resulting in an impromptu visit to the Spanish prison.

Set against the backdrop of the Spanish Inquisition, in the dangerous waters of the Caribbean, Perry and Quinn's relationship is accepted by the other pirates. It would help the reader to check out the Author's Notes situated at the end of the book, which are really interesting and explain the origins and history of "matelotage," or taking of a same sex partner. It really helps place the story in history and gives a sense of perspective.